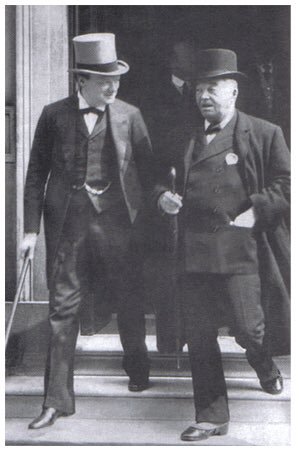 On this day in 1874 Winston Leonard Spencer-Churchill was born at Blenheim Palace in Oxfordshire. He twice served as First Lord of the Admiralty, from 1911 to 1915, and from 1939 to 1940, before going on to become one of the United Kingdom’s most famous and respected Prime Ministers. It is worth noting that in serving more than once as First Lord he was not unique, and not even in the matter of holding it under the banner of a different political party – George Goschen twice held the office, first as a Liberal under Gladstone and secondly as a Liberal Unionist under the Marquess of Salisbury.

When he was appointed First Lord, the political head of the Royal Navy, in October 1911, Churchill had to reorganise the rest of the Board of Admiralty and leadership of the Fleet to best suit his needs. In this endeavour he was assisted by Admiral of the Fleet Lord Fisher, who had served as First Sea Lord, professional head of the Navy, from 1904 to 1910. In the last few months of 1911 Fisher poured forth advice on appointments, which until this year had received very little attention, and the correspondence had languished in companion volumes or archives, and no context whatsoever had been given to them.

To that end I wrote an article surveying Fisher’s recommendations to Churchill and the appointments actually made. The work was published in May this year in The Mariner’s Mirror, journal of the Society for Nautical Research. It can be read here.